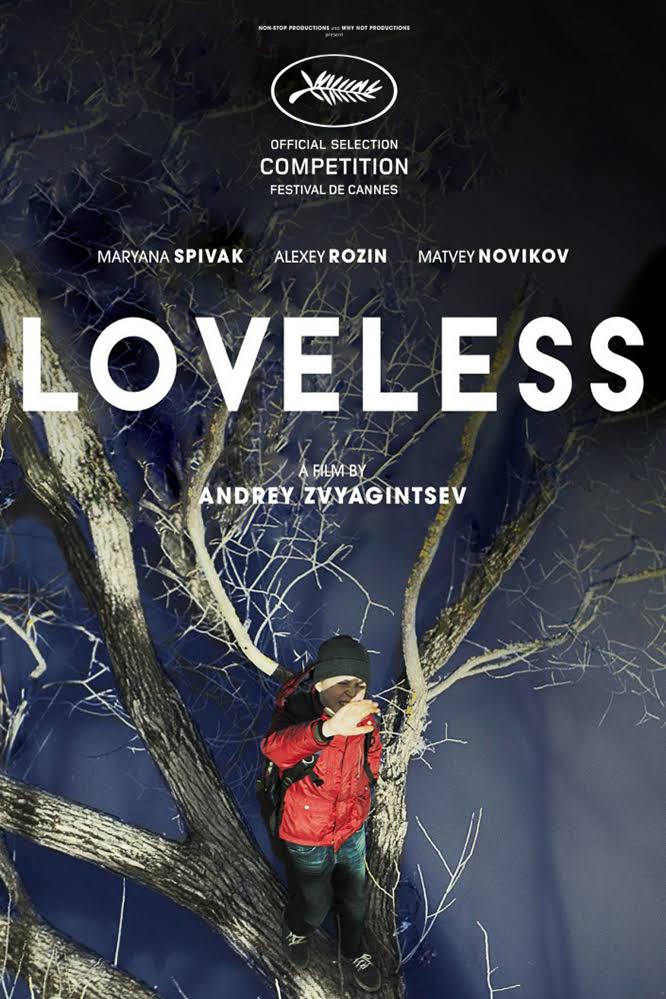 Andrey Zvyagintsev may just be the most important film-maker to come out of Russia since Andrey Tarkovsky. But whereas Tarkovsky’s cinematic vignettes, suffused with unforgettable poetic imagery and symbolism often take a while to unfold in the mind, Zvyagintsev’s social commentary has a more immediate impact, including a firmly contemporary political one. Nevertheless, there are echoes and parallels with Tarkovsky’s work. And not for nothing should Zvagintsev be proud that the Russian Orthodox Church and other Vladimir Putin acolytes attempted to suppress and rubbish his previous, extraordinary film, Leviathan.

His new film, Nyelubov’ (Loveless) is set during the final, vitriolic stages of a marriage breakdown, against a background of middle-class and nouveau riche Russia, which despite its garish colours is an empty canvas. One of the nightly arguments between the forceful Zhenya and the long-suffering Boris, played with conviction and subtlety by Maryana Spivak and Aleksey Rozin, concerns the future of their 12 year old son Aleksey (Alyosha) whom neither parent seems to want after the divorce. One of the most striking scenes in the film is Alyosha’s desolated reaction when he overhears their conversation.

Some of the other exchanges at the couple’s workplaces – hers a beauty salon, his, the sales department of an Orthodox Christian publisher (where the employees entertain Millenarian fantasies) – emphasise the moral and spiritual vacuity of their lives, whilst interspersed scenes of the sexual encounters between the pair and their new lovers mimic the way their own affair began.

While both parents are spending the night away with their respective lovers, Alyosha disappears. It takes Zhenya and Boris a day and a half to realise. A straight-talking social volunteer makes their short-comings clear without the necessity of enumerating them, by simply repeating some of their mystified answers when questioned about the movements and alliances of their absent son.

Their first quest in the search for Alyosha is to visit Zhenya’s estranged mother, a foul-mouthed misanthrope who lives in miserable isolation, soliciting one of the best lines in the film from Boris who asks plaintively, ‘Don’t you ever meet anyone else?’ If she represents Mother Russia this is Zvyagintsev’s latest slap in the face for the authorities. But, there is some eventual salvation, if not the one hoped for.

The lengthy, unsuccessful search for Alyosha reminded me of the aimless drive that the solarnaut takes following the debriefing on his return from Solaris, in Tarkovsky’s film of the same name. Surely, the point there is that, a bit like the moon, after you have been to Solaris, there is nowhere else to go. Zvyagintsev gives us his own version of this in the final scenes ofLoveless.

The understated core of the film is the resolution of the volunteer activists, who even the local police chief says do a better job than his over-worked force. Their trawl of the housing estates and nearby forests, seeking the disappeared Alyosha is testament to Zvyagintsev’s belief that if the actual Russian people can be mobilised in a similar fashion, they can help the country move on from the Putin-inspired kleptocracy and official corruption that Zvyagintsev attacked so directly in Leviathan. Meanwhile, in cinematic terms, the search of a series of abandoned buildings, using suppressed or washed-out colours (and the inevitable rain/water) echoes the odyssey of Tarkovsky’s Stalker around the industrial wasteland created by the Strugatsky Brothers in their source novel, A Roadside Picnic. And Alyosha’s terror is paralleled near the end when, having been invited to view the mutilated corpse of a child, the hysterical Zhenya reveals that she was only pretending to disown Alyosha to ‘get at’ her husband.

The strategically situated radio and television commentaries (near the beginning and end of the film) about the ongoing conflict in Ukraine and the Donbass hint as to the family drama of Zhenya and Boris being a metaphor for the breakdown of the former Soviet Union and Putin’s belligerent attempts to reintegrate it where possible. And on-air name-checks for both Putin and his political nemesis, Boris Nemtsov are a further hint to the audience that the current state of Russian politics is really what this film is about.

Zhenya might be acerbic and bitter – there are some things she learned from dear old ma – but she is right about the long-suffering husband. Boris has got another young woman pregnant, and at the end of the film, having clearly lost his job with his Orthodox boss, is bored with his wailing child, and is festering on the sofa at his new mother-in-law’s house, while she openly plans to offload the mini-family on her sister. Meanwhile, a glimpse of an old poster asking for information about Alyosha makes it plain he has never been found.

Though some of Zvyagintsev’s allegory is heavy-handed, the final sequence hammers the point home about Putin’s Russia. Zhenya, not needing to work anymore, is languishing in her affluent lover’s opulent open-plan house in the middle of the forest. She pulls on a tracksuit with ‘Russia’ emblazoned on the front in huge lettering. It seems she is going for a run. She is, but not in the forest – maybe that’s too dangerous – but on a treadmill on the deck of the house. Thus the final image of the film is Zhenya running, her face and the Russian logo towards the camera, and, like the aimless drive in Solaris, going nowhere.

Pat Butcher [1] is a writer and a journalist. His latest book is Quicksilver, The Mercurial Emil Zátopek.